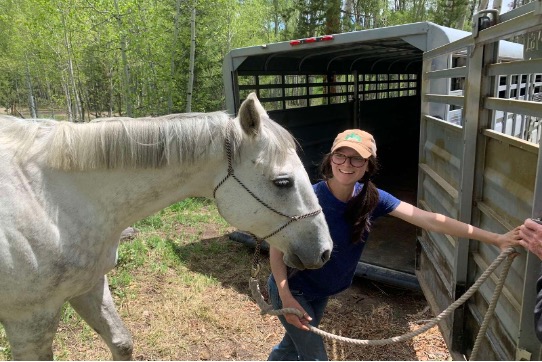 Trainer Emily Jacobs works to familiarize Beau the horse with getting into a trailer at the Pebble Creek Ranch on Monday, June 7.

Wildfire season continues to creep closer, evidenced by the hazy skies that emerged over Summit County on Tuesday, June 8, as smoke from fires burning around Colorado and the Southwest drifted overhead.

By now, Summit County residents should be well prepared, hopefully having taken the past few months to create defensible space around homes and ready evacuation kits in order to leave the area at a moment’s notice. But for those responsible for pets and livestock, there’s more to think about than just getting themselves out of the house safely.

“Wildfires have no boundaries,” said Sam Kirk, director of the Livestock Emergency Preparedness Program with the Friends of the Lower Blue River. “The professional wildfire fighting community is aware of that, and because of the predictions this year, they are trying to awaken people to be prepared both for their structures and their lives but also any of their defenseless animals, whether it be cats or horses or cattle. And being prepared means at the moment of the wildfire you can just automatically kick into your action plan.”

The Friends of the Lower Blue River, a local volunteer group dedicated to maintaining the environmental and historical integrity of the Lower Blue River Valley, began developing the livestock preparedness program about eight years ago as a result of the pine beetle epidemic, fearing that all of the beetle-killed pine would create heightened wildfire risks in the area for humans and the animals for which they’re responsible.

As a result of the program, the group created a document that is meant to prepare livestock owners and caretakers to safely evacuate their animals in the event of a nearby wildfire. The document, available for free on the organization’s website, urges livestock owners to make arrangements in advance to ensure animals can be trailered and taken off-site, speak with neighbors about evacuation plans, secure livestock paperwork and more.

In addition to tips on general preparedness measures, the packet also includes an evacuation-planning checklist, a list of safe zones where owners can take their livestock, information on the impact of smoke on livestock and ways owners can keep up to date on emergency announcements.

Kirk said he hopes everyone in the area, and those beyond, will use the resource to improve the safety of their animals.

“We have seen since then in other parts of the country, sadly in California and just this last summer up in Grand County, that a lot of the livestock owners were not prepared to evacuate or to save their animals,” Kirk said. “… We would like to share this as a model not only for other Colorado counties but hopefully in other western states.”

While having a proper plan in place is important, livestock owners also need to prepare their animals for the possibility of an evacuation. 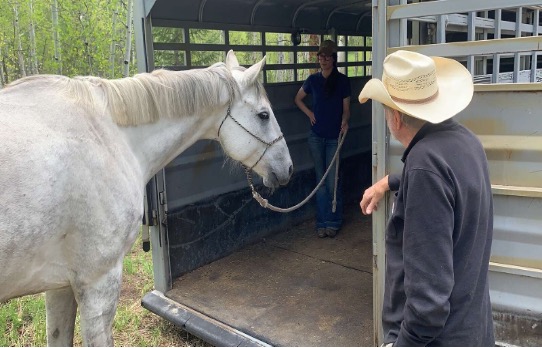 Horse trainer Emily Jacobs and Sam Kirk work to familiarize Beau the horse with getting into a trailer at the Pebble Creek Ranch on Monday, June 7.

Emily Jacobs, a horse trainer at Pebble Creek Ranch and member of Friends of the Lower Blue River, said trying to evacuate an animal in a trailer can be difficult and that owners should take the time to gently familiarize them with the process now before they ask the animals to do it in an emergency situation.

“Horses are different from humans in learning theory in a lot of ways but really similar to humans in that, when they’re stressed out, they’re not going to learn,” Jacobs said. “It’s just an uphill battle in a way that it’s not when everything is calm. One of my training tenets is stolen from Buck Brannaman, who’s a famous horse trainer, which is that if you can’t do it well slowly, you have no business trying to do it quickly. Preparation makes everything a whole lot better. When you really need a behavior to be available and you’re in an emergency, you’re going to wish that you practiced that when you weren’t in an emergency.”

If all goes well, livestock owners will be able to evacuate their animals themselves or will have arranged for help from caretakers or neighbors ahead of time. But as the best-laid plans of horses and men often go awry, the county has a backup.

And while larger animals are more difficult to transport in an emergency, Hall said domestic pet owners should also have an evacuation plan in place to make sure their dogs, cats and other animals can make their way to safety.

“We recommend that everybody have an evacuation plan for all pets, domestic and livestock, that you are prepared with carriers for cats, leashes and collars for dogs, that you have photos on your phone of your animals — basically that you create an evacuation kit for your pet so that you have something ready in the event you have to evacuate your home.”

Pet evacuation kits should also include bowls, food and water, treats, medication, ID tags, disposable bags or litter, veterinary records and phone numbers, and anything else the animal might need away from home. Pet owners who are not home during an evacuation should make plans with friends or neighbors to try to take the animal with them. If that doesn’t work, they should call the animal evacuation hotline and provide officials with any necessary information like the location of hidden spare keys or lockboxes.

Officials said that for pet and livestock owners, the time to prepare is now.

“Don’t be in denial, and don’t procrastinate,” Kirk said. “Take advantage of there not being any wildfire at the moment.