Threats to Our Water and Way of Life 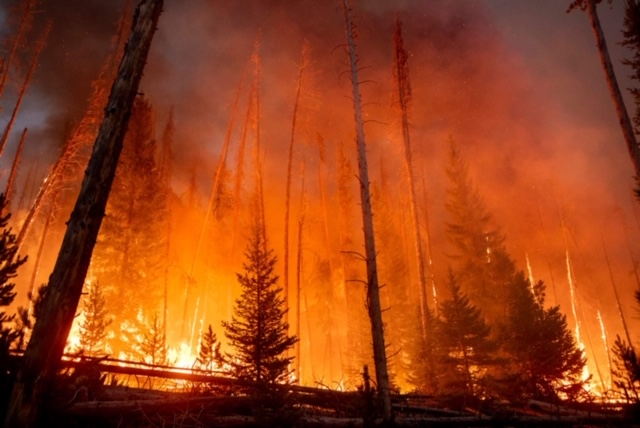 Wildfires continue to scorch significant swaths of land, most significantly in California but also in Colorado. These forests are necessary to combat climate change through carbon capture. Yet the warming trend exacerbates the severity of these wildfires. These fires release immense amounts of carbon. The fires also cost us trees and vegetation that fight pollution and capture carbon.  Though some believe it is a net neutral evolution as nature takes its course.
Some forest ecologists and atmospheric scientists generally view wildfire as being carbon neutral. As fires burn, chewing through structures and vegetation, they spit out vast amounts of carbon and other compounds in their smoke. "But then over time, we expect a lot of that carbon dioxide will be drawn back down by plants growing again," says Rebecca Buchholz, a scientist at the National Center for Atmospheric Research, based in Boulder. She says, "For fires, it's all about balance."

Given the amount of human driven fossil fuel burning combined with loss of vital forests and grasslands, we seem to be out of balance. A scarred landscape takes time to heal and return to a fully healthy ecological wonder that filters water and captures carbon. It has huge impact on our watersheds and our rivers.

The Grizzly Gulch Fire in Glenwood Springs is testament to the enduring scars fire and other ecological intrusions can exhibit. Land and water experts see years of negative impact in the Glenwood Canyon area from degraded soil in the watershed.

“During active burning, ash and the contaminants associated with ash settle on streams, lakes and water reservoirs. Vegetation that holds soil in place and retains water is burned away. In the aftermath of a large wildfire, rainstorms flush vast quantities of ash, sediment, nutrients and contaminants into streams, rivers, and downstream reservoirs. “
(EPA-Aug 2019)

This is particularly important to us in the west as a large percentage of our water emanates from forested watersheds. Wildfire is only one threat to the health of our waterways and rivers including the Lower Blue.

Historically, mining that provided short term economy also produced disastrous results for our environment right here in Summit County. The Snake River Basin has immense stream quality issues to such a degree that aquatic life is non-existent in many stretches of the watershed.

There is a current threat to the Lower Blue proposed by Peak Materials, an extractive gravel mining company in Silverthorne. Peak Materials has filed an application with the Colorado Division of Reclamation, Mining and Safety to mine gravel on 80 acres at the former Julie Hillyard property, set between several lovely ranches on the Blue River. The company is also expected to seek the required Conditional Use Permits (CUPs) needed to mine and import aggregate to the company’s Silverthorne processing site. Those permits come from the County. Such a mining operation will pose an immediate threat to the Blue River, downstream water and wildlife. It could potentially siphon water from the water table, depriving neighboring ranches of their legal water rights. There is a possibility of inflow into the Blue and the water table, polluting both. The mining could interfere with elk, deer and other wildlife that move relatively unhindered through the Blue River Valley.

It seems ill-advised to allow this to proceed considering the potential risks the Colorado River Basin faces with climate change and drought that threaten our water directly and indirectly through more severe wildfires.

These are risks all around us that we can arguably manage. Let’s not introduce another man-made risk to our water and environment with this mining pit. We already have enough fires to put out.
Tom Koehler
Sustainable Hiker